No body is talking about feature phone when still there are millions of 2G users in India who are predominantly using 2G handsets even now. In fact few days back when RCom announced its plan to shut down 2G business, a big question was what the millions of its 2G users will do though they have option to port to other operators.

Since 2G users base even when the current standard is 4G is quite large, we brought forward Lava Captain 9S which has been there in the market for quite some time though. 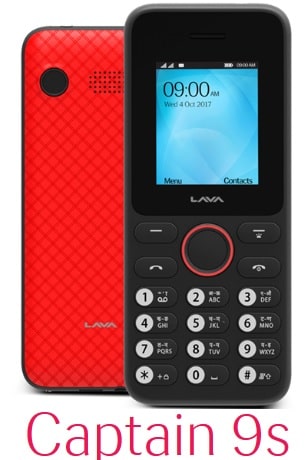 Being Lava Captain 9S price in India at Rs. 969 is not the only reason why people should be expected to continue using 2G handset and this network. In fact not many users are comfortable in moving to higher networks owing to higher cost in buying compatible models and also higher ultimate cost of using 4G network. Its mainly for those who need high quality internet find 4G more appealing. Lava Captain 9S in this way has the potential to appeal to so called old fashioned users in Indian market.

No one would expect extra ordinary features in Lava Captain 9S but limited to calling and messaging mainly. On its 1.8 inch screen having 120×60 pixels resolution, its nothing more than common sense what you can do. Like any other model model, here also one can listen to FM radio and can also record select songs. Only one station at a time can be enjoyed on this model.

Though there is GPRS in Lava Captain 9S for net access but given the high data charges, it will not be worth surfing here especially when screen size is quite small. With alpha numeric keypad, typing speed is also going to be just normal here. There is dual SIM but very few will be using them as its meant for 2G network only.

Certainly Lava Captain 9S price in India at Rs. 969 is quite a catch but even than it will appeal to niche set of users.