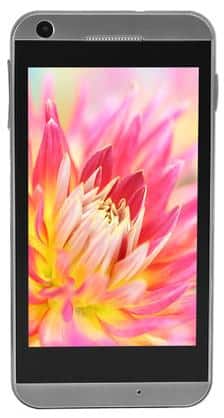 Lava Iris 405+ price is slightly higher than earlier model Lava Iris 405 due to better quality features especially for connectivity. Lava Iris 405+ comes with Wi-Fi hotspot which only few smartphone in this price range can boast and also have Bluetooth, GPRS and EDGE for internet access on 2G network. The smartphone has 5MP high quality camera but with fixed focus which is slight disappointing. Lava Iris 405+ has FM radio with song recording, games from Google play as some of the main sources of entertainment.

Lava Iris 405+ specifications for OS and battery are quite better and upgraded which will be appreciated by its end users also. It comes with 4 inch screen with WVGA quality and 480×800 pixels resolution which is standard to expect in this price range. Lava Iris 405+ has Android 4.2 Jelly Bean OS as compared to 4.1 version in earlier model. The smartphone comes with Li-Ion 1400 mAh battery which gives talk time support of 10 hours but only 2 hours on 3G network.

Lava Iris 405+ price in India will be highly suitable for users who need Wi-Fi hotspot, large internal memory and latest OS in their smartphone. One of the drawbacks of Lava Iris 405+ is only 0.3MP secondary camera.