It reminds us of old times when smartphone players were quite aggressive and launch of multiple models from same brands was norm of the day. But now that has become history as success is no more so easy and it some times dilutes the reputation in case end users do not receive so well.

However if we watch out new trend, it seems the same strategy is back on the track as Lava has launched four models in Z series in the current festive season and Lava Z70 is one of them. 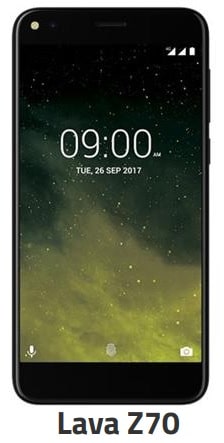 The four models which have been launched are Lava Z60, Z70, Z80 and Z90 and among them Lava Z70 which is available at price of about Rs. 8000. If we go in price wise, Lava Z80 is next model and Lava Z90 price makes it the costliest among all. The first model Lava Z60 comes out to be lowest among all is some where around Rs. 5,500. It is quite clear they are meant to bottom end of 4G users who can be wooed by low price and slight variation in features quality.

All these models including Lava Z70 has 5 inch screen or even better one. In this particular model one has to be content with 8MP camera at rear end and 5MP at front and not many would be ready to be content less than this level. With Android 7.0 Nougat, multi tasking will be even more easier and simpler but scope for OS update does not look so bright.

With 1.3GHz Quad core processor and 2GB RAM, certainly Lava Z70 appears to be acceptable in terms of performance level. Not many in the market in the price range of Lava smartphone Z70 would have 16GB ROM like it has. It is available in popular colors i.e. white gold and black.

With 8.30mm thickness, the new smartphone Lava Z70 in India is more of a slick in nature though you may have your own perception.