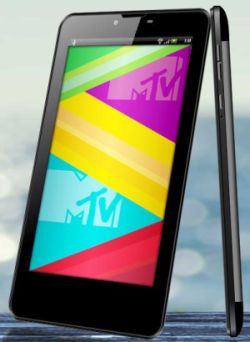 Swipe MTV Slash 4X price is going to make it affordable for entry as well as mid level users especially first time tablet buyers in India and its features supports that very well. It has voice calling option which users can enjoy on the 3G network services and quite important even in social networking. Swipe MTV Slash 4X comes with 2MP primary camera which is not so attractive and also 0.3MP secondary camera which may be used occasionally. It has Wi-Fi, 3G, A-GPS for navigation for providing better connectivity which will make it suitable for even professional users.

Swipe MTV Slash 4X specifications on certain parameters like display quality, dimensions are quite better than many of the tabs available in similar price range in India. It comes with 7 inch screen which is common but has IPS display which is rarely seen and will ensure much better quality display of content. Swipe MTV Slash 4X comes with 4GB of flash memory which is enough to store regular files and users can expand it up to 32GB with the support of microSD card. It has 267 grams of weight and has 188.5×108.3×9.6mm dimensions which shows the good level of portability associated with this tab.

Swipe MTV Slash 4X price in India is quite competitive especially considering its voice calling option, IPS display and 1.3GHz Quad core processor. Some of the issues users shall also notice are only basic quality cameras and need to check battery support also.