Few days back, Motorola Droid Turbo has been spotted on the benchmark site which gives more information on this devices. This is expected to be launched in this month only.

In our last post, we have revealed the leaked information on Motorola XT1254 model and now there is more news coming on this mode. This time, Verizon has announced the launch of Droid device on coming October 28th and the high probability is, it will be Motorola Droid Turbo only. Also there is more highlight on the quality of features and specifications that can be expected in this devices. 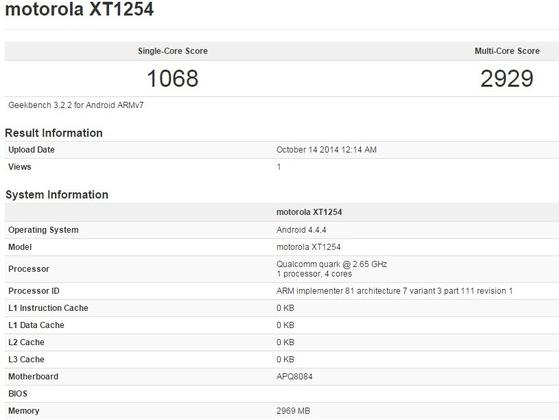 On primary camera front, Motorola Droid Turbo will a bumper offer for its potential users. It will be powered with 21MP camera which is as good as any professional camera. Also it is expected to have all kind of additional qualities like LED flash, continuous shot, HDR etc. which will ensure it is no way behind any other smartphone camera in the market. There is no information as yet on the secondary camera.

The smartphone Motorola Droid Turbo is going to have Android 4.4.4 Kitkat which is also another features users are eagerly waiting to explore. In terms of internal memory, this smartphone will have 32GB of internal memory and there is hardly any need for memory expansion in such conditions.

Motorola Droid Turbo launch in India is not clear as yet.