Skip to content
Home › OPPO › Oppo A85 Price in India, listed on TENNA with sneak peak on major features

Oppo A85 price in India
With in few months, the 5 inch screen may become quite old fashioned as more and more models are coming with larger screen. Having this makes them more suitable for better display of movies, images, playing games and in fact offers much better productivity as well.

It does not make much of a difference in portability choosing 5.7 inch screen model over 5 inch one. Its the new season of 5.7 inch screen models which has been getting attention from almost every major player in the local as well as global market. Most of the Chinese player have made significant progress in this and now Oppo is also going to launch Oppo A85 with this feature quality. 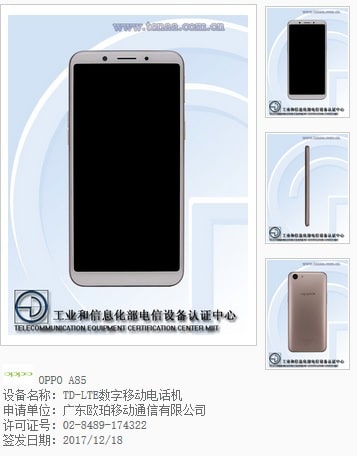 Right now Oppo A85 has been highlighted on the TENNA on December 18, 2017 and hence people are reasonable to expect to hit market in coming weeks or so. Its going to be jsut above affordable range and Oppo A85 price in India shall lie in the range of Rs. 10-15K. Though not full features details of Oppo model A85 has been revealed on TENNA site and not everything could be read also as its in Chinese but it gives a good feel of major specifications.

Oppo A85 will continue with 18:9 aspect ratio and 1440×720 pixels resolution on the screen. Keeping pace with trend in the market, the new smartphone will have 4GB RAM and 32GB ROM which can go up to 128GB without adding much strain to the performance. Though new Oppo smartphone A85 does not 4 set camera which is a slight disappointment but even than presence of 13MP on rear and 8MP on front can not be missed out.

Though on weight side, Oppo A85 comes slightly heaver with 143 grams but with 7.7 mm thickness its quite appealing in slimness. With 2.5GHz Octa core processor and Android 7.1.1 OS, you can simply be carefree about the performance for any kind of application. There is not any news of A84 model after A83 and its straight to Oppo A85 which indicate the A84 model may have been shelved somewhere in the line or may surface later.

Lets wait for official Oppo A85 price in India and its launch as well.