Honor MagicWatch 2 Limited Edition Price in India
In last few days we have seen smartwatch models hitting different markets which were more towards ruggedness having high military standards like Garmin Tacttix Delta smartwatch. They were mainly from US and other Western brands but now its the turn of the Chinese brand in different direction. Huawei has unveiled in UK its Honor MagicWatch 2 Limited Edition models which are themed on fashion and sports. 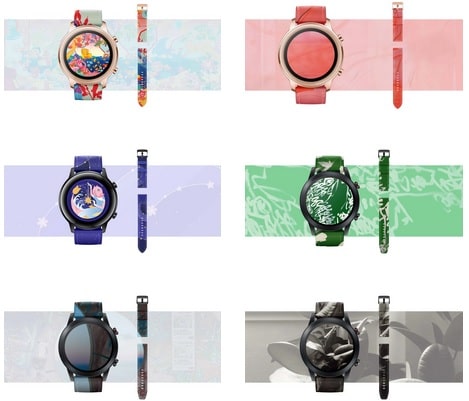 One thing which is clear from designs of Honor MagicWatch 2 Limited Edition is they are meant for young and people looking for stylish products on their hands. Such kind of smartwatch shall definitely appeal to woman consumers also in different countries including to which one additional adding point is affordability of the watches.

Coming to the designers who contributed to Huawei Honor MagicWatch 2 Limited Edition design are Jacky Tsai, George Greaves, Wang DongLing and Giovanni Ozzola. All of them has choosen their different themese in design which has boraden the portfolio and hence wider choices for the consumers. Jacky Tsai choose to design “Floral Horse” and “Shanghai Tang Café”; meanwhile George Greaves went for trees than flowers and designed “The Palm Tree”. The Chinese deisgner Wang DongLing prefered the “Cheng Hao, ‘Autumn Moon’, Entangled Script” and Giovanni Ozzola designed little philosophical i.e. “One Day”, Old Walls” and “Ficus”.

When it comes to size, Honor MagicWatch 2 Limited Edition are again available in similar two size models i.e. 46mm and 42mm. The screen size available in the watch is 1.39mm with AMOLED quality. If used prudently, its battery has the capacity to last up to 14 days.